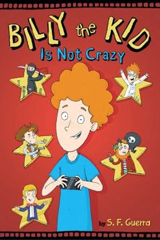 Billy March has been grounded for 63% of the past month. Every time he almost gets his parents’ trust back, his mind wanders off, and he causes another disaster! Like the time he and his best friend Keenan decided to play droid war in a parking lot—and ended up launching a shopping cart into a car. . . .

Now Mom and Dad are threatening to send Billy to a psychologist. They may even make him take brain drugs! But deep down, Billy really worries that Dad wishes he had a different son. He’ll never be as perfect as his sisters. Maybe he doesn’t belong in this family at all. But maybe, just maybe, talking to a “shrink” won’t be as terrible as Billy thinks.

With generous black-and-white illustrations in every chapter and tons of heart and humor, readers will be cheering for Billy as he struggles to find his place in the world—and discovers his true talent in the process.

“Whip-smart Billy’s over-active imagination usually leads to small disasters. His parents are frustrated, and Billy’s relationship with them is deteriorating. With the help of a therapist, he begins managing his impulses. Billy and his family are fully drawn, and many kids will recognize familiar dynamics in this funny tale. Black-and-white spot art and comic strips highlight Billy’s humorous inner musings.” —The Horn Book

From parents and readers on Amazon:

“My son is a reluctant reader, but Billy the Kid is Not Crazy is the first book he ever read with enthusiasm on his own. He laughed out loud a few times, and could really relate to the main character.” –Scott Sherman

“I’m considering buying ten copies to have on-hand as my friends’ children age. This is great for kids and parents. It’s about a boy who is totally NOT crazy. He’s a typical dreamer who often makes bad decisions because…he’s still a kid!” –Mage

“My third grader loves this book. It is filled with heart and humor… I love the jokes that are mixed in and the heart felt moments. Junie B watch out.” –Edward Walker

“The author has done such a wonderful job with these characters… The artwork is a great addition, delivering tons of laughs. Combine that with some truly witty dialogue and you get a book that is in turn hilarious, thoughtful, and very real.” –J. Prather

“The artwork in the book is great, lots of fun. Really adds a lot and speeds up reading–illustrations in books are almost always a plus! Highly, highly, HIGHLY recommended!” –K. Davis

“I got this book for a boy who is diagnosed with Asperger’s… He sped-read through the book once and liked it so much that he’s reading it through again but more slowly. He says the title character is “just like” him.” –J. Tant

Billy is not crazy, he’s just an 11 year old Calvin-without Hobbes-whose active imagination trips him up at every turn… I have no doubt that my upper elementary students will love the West Seattle setting as much as they enjoy Billy’s everyday misadventures.”   –Craig Seasholes (full review)